The Kogi Burrito Sandstorm of Bliss

When all hell breaks loose, you better hope that you have a burrito in hand. But not just any burrito: the Kogi short rib burrito can make you wax poetic the beauty of chaos within the first bite.

After a random mid-day whirlwind that sent easy-ups on a wild ride, we should have expected it. However, most people were still unprepared when a rough sandstorm hit Saturday night at Coachella (Week 1). As cold, dusty wind whipped our faces, some of us headed back to camp to hold down the fort, some kept jamming at the stages, and others–like myself–sought out a taste of comfort.

As a resident of Southern California residing near a frequent Kogi spot, I headed towards the familiar truck logo; its fiery emblem  was a warm image during the cold winds of the storm. After receiving our burritos (we decided that open-faced tacos were impossible in the gusty weather), my friend and I headed towards the side of the beer-garden where the Coachella stage was visible.

Sitting on a step with the wind blowing my hair, I bit into my short-rib burrito. Immediately, my muscles that had been tense from the storm relaxed. Juicy short rib danced inside my mouth with a light zing of cilantro. The flavors of chili, soy, and sesame had a smooth jam session while Queens of the Stone Age played in the background. The storm had dried me out, but with the absence of rice, the burrito was endlessly moist (yet still, somehow, wasn’t messy or dripping), and I was infinitely happy.

Kogi’s claim to fame is incredibly true: “If L.A. had a song, you’d hear it in the first bite. If L.A. had an anthem, you’d find it in your first meal.” In the midst of a turbulent storm, this burrito brought me a feeling of home, but it also gave me the strength to return to the party.

0 comments on “The Kogi Burrito Sandstorm of Bliss”

Until my site is back up to speed, enjoy this luscious beet, apple, ginger juice! 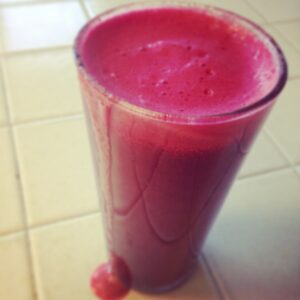